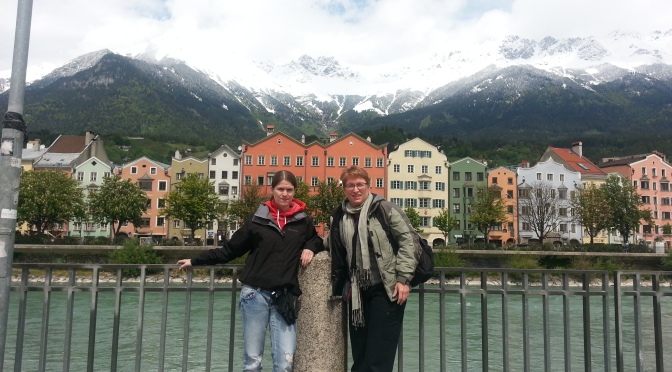 The fun started at the airport. We watched people going through the security scanners with their hands in the air and terrified expressions of ‘please don’t shoot’ on their faces. We laughed nervously, hoping we would not join the unlucky ‘frisked’ ones.

We made it through safely and I bought a small, overpriced, notepad. I forgot to take my boarding card to the till so the lady asked my destination. I told her Stuttgart, to which she replied, “Is that in Europe?”

We sat in the bar while we waited for our gate to be announced. Knoxie read a health and fitness magazine and ordered chips and a pint of cider. A lady on a nearby table ordered a large salad – with a side of salad and a man gave the bar staff his table number of, “That table over there with the blonde lady on.”

We overheard someone describing the sandwiches in Pret a Manger as gay.

An air hostess sat next to Knoxie on the plane and fell asleep. Apparently she was just a normal passenger who was dressed as an air hostess.

Colleen met us at Stuttgart airport and we were surprised to hear her use the phrase ‘Flipping flapjacks’ as an alternative to her old catchphrase, ‘f***ing f***sticks’.

The next morning we made an early start and grabbed some breakfast on the road. Knoxie attempted to speak German in a bakery. She pointed at the croissants and said, “Drei.” The baker looked confused and replied, “One?”

We stopped in Munich and Colleen announced, “I just peed.” It turned out she just needed to go again, rather than she had just wet herself. Colleen was an excellent tour guide, pointing out things like ‘more buildings’ and explaining that nearby there is a ‘whole bunch of stuff’. We stumbled across two shrines; one to Michael Jackson and one to a monkey.

We headed onto our destination which the satellite navigation system pronounced as, “Gaaaaarmish Paaaarten Kiiiiiirschen.” Knoxie pointed at a sign saying ‘Einfahrt’ and said, “Just the one fart for me please.”

In the evening we explored the town. We passed many statues of Jesus and overheard someone say, “Good morning Mr Jesus. Say hello to your family, loved ones, and the ghost.”

Knoxie, who has a first degree in zoology, pointed at a kitten and said, “It’s a baby cat.”

I was asked for ID in a bar causing Colleen to say, “Flipping flapjacks!”

We visited Neuschwanstein Castle. I crouched down to take a photo of Knoxie and Colleen with the pretty castle in the background. Colleen crouched down too – for no apparent reason.

Knoxie’s monkey hat caused much amusement to many passers by.

We took a bus up a big hill in Innsbruck. Colleen bought the tickets and was asked if it was for one adult and two children – more flipping flapjacks. As we got off the bus, an Austrian man looked at my trainers and laughed, “Shoe, hahaha. Shoe, hahaha.”

Colleen forgot to flip her flapjacks on the cable car down the mountain and cursed in front of a little old lady. Knoxie attempted to speak German again but this time did it veeery slooowly.

Back at Stuttgart airport, Knoxie remarked that the security woman was not very friendly. Knoxie was promptly and thoroughly frisked. Her airport humiliation continued after she had discreetly placed a tampon in her pocket but then sent it flying across the terminal floor when removing her phone from the same pocket.

Knoxie’s travel woes continued when her plane seat neighbour leaned over and scratched her head into Knoxie’s lap. Oh how we laughed.

So those were just some of the things that made us chuckle. Maybe you had to be there but for us they created happy memories of Germany and Austria. Good times.

One thought on “A Whole Bunch of Fun Times”