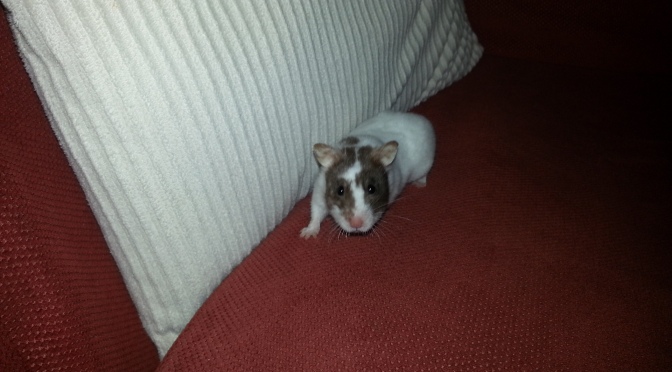 This morning, after the moonlight was replaced with a blindingly bright light, one of my humans asked me what I had been up to. So here is how I spent my last 24 hours:

6.00am: I had been running in my wheel all night. I was going really fast but starting to get tired when one of my humans came in and the bright light suddenly appeared.

6.15am:  My humans were rushing around and making a noise. I could smell food so I ran around in my cage to get their attention. I ran to my empty food bowl and then up to the side of the cage. I pulled my best adorable yet hungry face. My human passed a slice of banana through the bars…nom nom nom!

6.45am: The bright light went out and my humans left. The moon had gone by now so I went into my house and fell asleep.

5.00pm:  My humans returned so I came out of my house to see if they had any more food for me. They didn’t, so I went back to sleep.

8.00pm: I woke up and left my house to stretch my legs. One of my human’s giant hands came into the cage and picked me up. She took me to the big red thing where the other human was sitting. I tried to get in the gap at the edge of the big red thing but the human grabbed me and pulled me out. I climbed over the human to try to get to the other gaps but was distracted when I saw the human’s tasty fingers. I ran to try and take a bite but it moved out of the way.

8.15pm: My human picked me up, put me in the green ball and closed the lid. It was zorbing time! I ran across the room, faster, faster and faster until I smashed into the wall. Then I turned round and ran the other way until I hit the wall again. It was so much fun that I did it over and over again.

8.30pm: I stopped for a break and pooed through the cracks in the ball.

9.30pm: My ball suddenly rose into the air. The lid opened and I was at the gate of my cage.  I could smell there was food in my bowl so I climbed out of my ball and into my cage. I shoved all the food into my pouches and moved it into my house, well hidden from my humans.

9.35pm: The humans picked up my poo while I checked out my cage. I’m not sure what they do with the poo but they must like it as they had put some treats in my cage.

9.45pm: I went back to my wheel and ran some more. The bright light went out and was replaced by the moonlight. The humans said goodnight and left. I danced and ran in the moonlight all night until the bright light reappeared and the human asked me what I had been up to.

So that was my day. I have a feeling today will be similar, and probably the day after too.