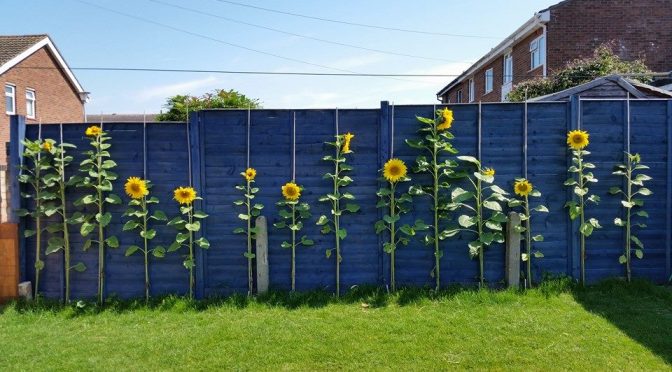 After a year off, the Bull-Knox sunflower contest is back! And this time it’s bunny proof. We hope!

Demand for a seed in the 2017 contest has been higher than places available  so some people have teamed up to cheer on a seed together.

The seeds will be nurtured in Dad’s greenhouse until they are ready to take their place in the sun along the blue fence.

The aim of the game is to grow the tallest sunflower. Measuring will take place at Knoxie’s birthday barbecue in August. But the flowers have to survive first! And life won’t be easy. As well as the usual threat of snails, and stem rot, further danger awaits these sunflowers in the form of the Bull-Knox beasts.

Protective netting proved no match for the Bull-Knox resident bunnies, Pongo and Indie, in the 2015 sunflower contest. The rabbits breached the defenses, slayed the sunflowers and devoured them before they bloomed.

The competition didn’t take place in 2016 as we couldn’t think of a plan to keep the flowers safe. But genius o’clock has struck! This year the plan to safeguard the sunflowers is to keep them out of the rabbits’ reach. Instead of going in the ground, the flowers will go in pots attached several feet up the fence.

We’re hoping this new tactic works. Come on sunflowers. We’re rooting for you!

One thought on “The Bull-Knox Sunflower Contest 2017 has begun”