Welcome to the virtual book tour for
Unreachable Skies by Karen McCreedy. 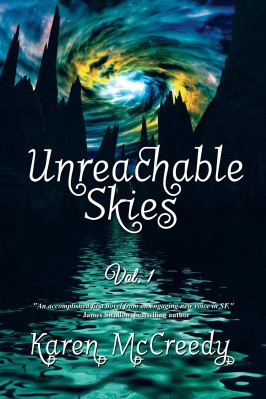 In a world where it is normal to fly, what happens when you can’t?
About Unreachable Skies:
When a plague kills half the Drax population, and leaves the hatchlings of the survivors with a terrible deformity – no wings – suspicion and prejudice follow. Continuously harassed by raids from their traditional enemies, the Koth, the Drax are looking for someone, or something, to blame.
Zarda, an apprentice Fate-seer, is new to her role and unsure of her own abilities; but the death of her teacher sees her summoned by the Drax Prime, Kalis, when his heir, Dru, emerges from his shell without wings.
A vision that Dru will one day defeat the Koth is enough to keep him and the other wingless hatchlings alive – for a time. Half-trained, clumsy, and full of self-doubt, Zarda must train Dru to one day fulfil the destiny she has foreseen for him, even if it is quickly becoming clear that the Prime’s favourite adviser, Fazak, is not only plotting against the wingless, but is gaining more of Kalis’ trust by the day.
Efforts to fight prejudice and superstition are certain to lead to death for some and exile for others; while Zarda’s own journey to understanding her role in events may lead her to abandon all tradition in order to protect her peoples’ future.
Exclusive Excerpt:

The badge was cool and light in my paw, its circular edge worn near the top, where generations of Fate-seers had held it while they pinned it on. Feeling the weight of their legacy, I hesitated for a heartbeat more before I fastened it to the front of my tunic. As I smoothed the black-and-white striped fabric, I realised that it was stained with grease and kestox syrup, but a glance at Morel’s impatient ear-twitching told me there was no time to change. I took a moment to brush my fur, comb my whiskers, and wipe my paws, then set my ears straight and tried to keep my tail still.

“I’m ready.” That was untrue. I had been nervous enough on the few occasions that I had been admitted to Kalis’ presence, and there had been no need then for me to do more than dip a bow and set my ears and wings to the appropriate angle. Vizan had taken me with him to observe, and Kalis had taken no more notice of me than he had of Vizan’s shadow. Now I was being asked to take Vizan’s place – not merely to speak, but to watch over Kalis’ egg and pray for the hatchling.

Pray? I wasn’t even sure I could remember the correct words for the occasion, let alone put them in the right order.

Morel didn’t hear the doubt in my voice, though. He half-raised his wings and dipped his ears to acknowledge Vizan, turned, and ducked out through the doorway.

I peered around the screen to give Vizan a last glance, half-hoping that he would sit up and declare that he felt much better, but his eyes were closed again and he rasped a snore. There was nothing for it but to follow Morel outside.

Vizan’s dwelling was the central point of the High Council cluster. Not for the first time, I wished that there was enough room on the curving pathway for me to spread my wings and fly over the other dwellings on the isolated mesa. The thought had hardly grazed my mind when the long shadow of a guardflight patrol skimmed overhead. I looked up to see who was on duty, but against the after-zenith sun all I could see was a silhouette with a bow in one paw. From where I stood the trackway spiralled through the cluster, thin soil showing through the moss that covered the rest of the plateau in red tussocks. A delicious aroma of fresh-cooked fish drifted from the next dwelling, where Hapak, the Chief Artisan, lived, reminding me that I hadn’t eaten since dawn. My stomachs rumbled a protest, but I’d long since regurgitated and rechewed my breakfast; I would have to stay hungry for a while longer.

An easterly breeze freshened the air with the scent of waterweed; half-heard voices from Hapak’s dwelling vied with the hiss-and-rattle of the sea dashing pebbles against the base of the cliffs. The wind was chilly, reminding me that the harvest season was almost over, and I raised the fur on my arms a little, wondering if I might go back inside for a snack and a warmer tunic.

Morel, a few steps ahead of me on the winding path, looked back to check I was following, and slapped his tail on the ground to show his exasperation. “Zarda, we do not have time to admire the view.” Without another word, he turned and led the way around the trackway to the Spirax, where the Prime dwelt.

Brought up in Staffordshire, England, Karen McCreedy now lives in West Sussex where she recently retired from the University of Chichester. She has written articles on films and British history for a number of British magazines including ‘Yours’, ‘Classic Television’, and ‘Best of British’.
Karen has had a number of short stories published in various anthologies. She also won second prize in Writers’ News magazine’s ‘Comeuppance’ competition in 2014 with her short story ‘Hero’.
‘Unreachable Skies’ is her first novel. 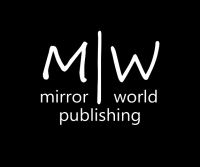 One thought on “Exclusive Excerpt: Unreachable Skies by Karen McCreedy”