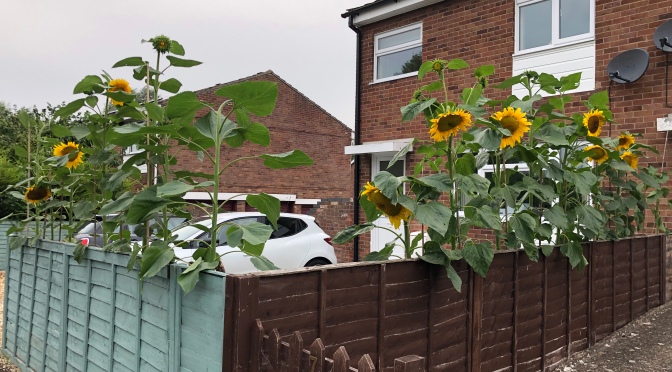 Ricarah soars up to the sky to be hailed the tallest flower, and Daisy is named the prettiest sunflower.

The step ladders had to come out of the shed for judging day of the Bull-Knox Sunflower Contest 2019.

Ricarah was the tallest, measuring in at a whopping 266 cm. Shmelling was the next tallest at 258 cm with Gramps close behind on 257 cm.

Ricarah, Shmelling and others are yet to bloom so could get taller but it’s the height on judging day that matters!

As it was Knoxie’s birthday weekend she accepted the invitation to judge the prettiest flower to win the Indie Award 2019.

Sprilby and Moomins were close contenders but after much consideration, Daisy was declared the prettiest sunflower.

The final measurements for all the competitors are below (in centimeters) along with Knoxie’s comments in the judging of the prettiest flower:

The relocation of the contest from the rabbity dangers of the back garden into the front garden has been a success. For the first time ever, all sunflowers survived the duration of the contest, and record heights have been achieved.

Well done to all competitors and thank you for taking part. Tune in next year for the 2020 competition.