Welcome to the Cover Reveal for
Ascent:
Unreachable Skies, Vol. 3
by Karen McCreedy
About the Book:
Zarda, the Fate-seer, and the Drax she accompanied into exile have settled into a new life far to the north of their homeland, the Expanse. They have pledged their loyalty to Kalon, whose rightful place as Prime was stolen by his brother Kalis.
Zarda’s one certainty is that Kalis’ wingless heir, Dru, is destined to defeat their old enemy, the Koth; but how is he to do that when he is no longer the Prime’s heir? And how can Kalis, his scheming adviser Fazak, and their followers be overcome?
To find the answers and to help the rightful Prime take his place in the Spirax, Zarda must first find a way back through the Crimson Forest for the exiles – but danger and betrayal await them all.
The Cover: 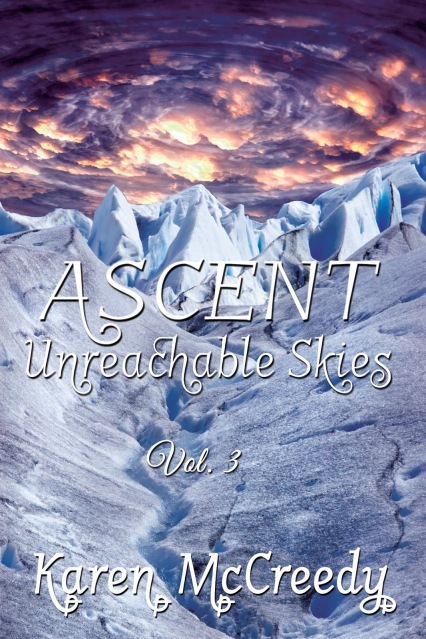 Brought up in Staffordshire, England, Karen now lives in West Sussex where she is enjoying her retirement. When not writing she enjoys reading, watching films, local WI and U3A activities, volunteering with the South Downs National Park Volunteer Rangers, and spending time with friends and family. She has also flown in a Spitfire!
Karen has written articles on films and British history for a number of British magazines including ‘Yours’, ‘Classic Television’, and ‘Best of British’. In 2009, her essay on ‘British Propaganda Films of the Second World War’ was published in ‘Under Fire: A Century of War Movies’ (Ian Allen Publishing). She also wrote a number of online articles and reviews for The Geek Girl Project (www.geekgirlproject.com), as their British correspondent.
Karen’s short stories have appeared in anthologies by Fiction Brigade (2012, e-book), Zharmae Publishing (‘RealLies’, 2013), Audio Arcadia (‘On Another Plane’, 2015), Luna Station Publishing (‘Luna Station Quarterly’ December 2015), Horrified Press (‘Killer Tracks’ and ‘Waiting’, both 2015; and ‘Crossroads’, 2016), and Reflex Fiction (‘Voicemail’, published online 2017). She also won second prize in Writers’ News magazine’s ‘Comeuppance’ competition in 2014 with her short story ‘Hero’.
‘Ascent’ is the third and final book in the ‘Unreachable Skies’ trilogy and Karen is now working on her next science-fiction novel.
You can follow Karen on Twitter @McKaren_Writer, or check out her website at www.karenmccreedy.com

One thought on “Cover Reveal for Ascent: Unreachable Skies, Vol. 3 by Karen McCreedy”