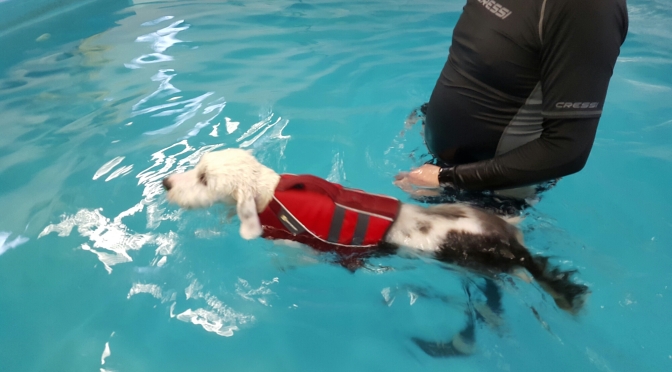 Fozzy took to the pool like a duck to water in her first hydrotherapy session today.

She was referred by the vet for hydrotherapy to help build up her muscles, particularly in her back legs.

Fozzy didn’t have a great start to life. When we got her aged six months she was a bag of bones at just 5.5kg and hadn’t had the chance to build up her muscles.

She’s almost at the right weight now and we were taking her for plenty of walks to build up her muscles. She loves a good off lead run but we noticed she was very stiff afterwards and occasionally whimpered.

The vet explained that her muscles were under-developed and she was probably sore after long walks, much the same as any person would be if they exercise to their limits. Hence the referral for hydrotherapy.

The idea is that swimming will exercise the muscles without the impact of walking or running. The pool is warm to encourage blood flow and apparently a six minute swim is equivalent, exercise wise, to a five km walk.

Her first session was really to get her used to the water. She had paddled and splashed about before but never actually swam.

Dr Andy was ready in his wet suit when we arrived at the Spring Meadows Canine Hydrotherapy Centre in Buckden. He put Fozzy into a bouyancy aid and we took her through to the pool area. She needed some coaxing up the ramp to the the pool but Andy lifted her in and onto the safety platform where she could stand up.

Andy was in the circular pool with her and led her round the edge with me walking with her outside to encourage her along. When she got back to the safety platform we gave her loads of fuss. After a few goes, and when the tennis ball went in the pool, her tail came out from between her legs and she seemed to be enjoying it. 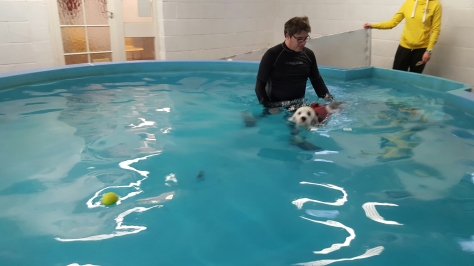 Although she was able to swim by herself, she was mainly using her front legs and kept her back legs tucked up to her body. This was probably because she doesn’t have much strength in them. This caused her to be off balanced but Andy was confident she’ll soon start using them to keep herself upright.

She’s booked in for session two next week and we’ll hopefully get her using her back legs. Right now she’s drying off and enjoying a well deserved sleep.