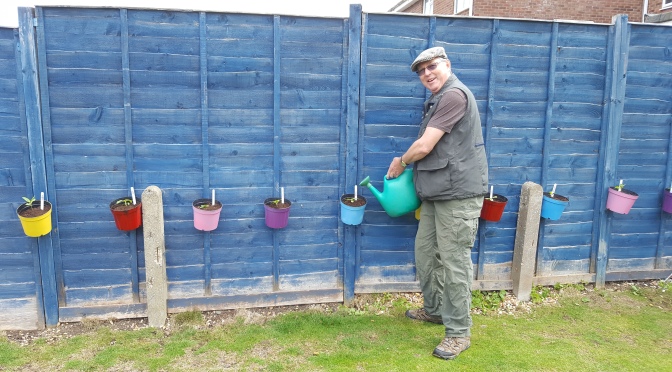 The competitors in the Bull-Knox Sunflower Contest have moved from the safety of the Moomins’ greenhouse to the Bull-Knox garden fence.

To prevent the carnage of the 2015 contest, when all the sunflowers were eaten by bunnies, pots have been attached to the fence out of the rabbits’ reach.

Le Bowd’s plant, maybe deciding the competition was too risky, failed to show up. This opened up a spot on the fence for substitute number one, Bobaul.

Early leaders are Em&Em, Gibbles and Amme but all plants are looking healthy.

Substitute number two, Dojo, will return to the Moomins’ greenhouse and prepare itself to join the competition should another flower perish.

Resident cuties, Pongo and Indie, destroyers of the 2015 sunflowers, are fuming about the new tactic to keep the flowers out of their reach. Will they find a way to get themselves a sunflower flavoured snack?

After just a week in the shelter of Dad’s greenhouse, the competitors in the Bull-Knox Sunflower Contest 2017 have sprouted. Well, most of them. Le Bowd is yet to show itself and Steclaire is only just starting to peek out. Meanwhile, substitute number 1, Bobaul, is growing well and preparing to compete in place of a non-surviving starter.

After a year off, the Bull-Knox sunflower contest is back! And this time it’s bunny proof. We hope!

Demand for a seed in the 2017 contest has been higher than places available  so some people have teamed up to cheer on a seed together.

The seeds will be nurtured in Dad’s greenhouse until they are ready to take their place in the sun along the blue fence.

The aim of the game is to grow the tallest sunflower. Measuring will take place at Knoxie’s birthday barbecue in August. But the flowers have to survive first! And life won’t be easy. As well as the usual threat of snails, and stem rot, further danger awaits these sunflowers in the form of the Bull-Knox beasts.

Protective netting proved no match for the Bull-Knox resident bunnies, Pongo and Indie, in the 2015 sunflower contest. The rabbits breached the defenses, slayed the sunflowers and devoured them before they bloomed.

The competition didn’t take place in 2016 as we couldn’t think of a plan to keep the flowers safe. But genius o’clock has struck! This year the plan to safeguard the sunflowers is to keep them out of the rabbits’ reach. Instead of going in the ground, the flowers will go in pots attached several feet up the fence.

We’re hoping this new tactic works. Come on sunflowers. We’re rooting for you!

We are down to the final five sunflowers of the competition.

The dawn netting repairs were not enough to keep the bunnies out this morning. They munched their way through all but two of the original competitors, leaving the sunflowers of just Moomin Papa and Abi remaining.

The final three substitutes belonging to Debbie, Nicky and Elena have now been planted.

The netting has been secured and pegged down so tight that if the bunnies do get through then they have well earned their snacks!

The final five, from left to right, belong to: Moomin Papa, Abi, Debbie, Nicky and Elena.

Indie was caught behind the protective netting this morning (Monday) and is the prime suspect in the case of another missing sunflower.

No further damage had been caused at the time of finding the bunny and Marky’s sunflower was still standing.

Indie was removed and the netting restored. However, just over an hour later, Marky’s plant was gone!

Security will be ramped up in an attempt to keep the remaining sunflowers safe!

Five sunflowers have been eaten by the bunnies!

While the Bull-Knoxes were out enjoying a barbeque today (Sunday), the hungry rabbits decided to have a feast of their own.

Pongo and Indie targeted the plants on the right side of the fence and devoured the sunflowers of Gilbey, Kathryn, Princess, John H and super sub Kevin.

Miraculously Marky’s sunflower, despite being in the middle of the attack, was left standing, although its leaves are a little nibbled.

The three remaining subs, Debbie, Nicky and Elena will now enter the contest and at this rate the winner will be the last sunflower standing! 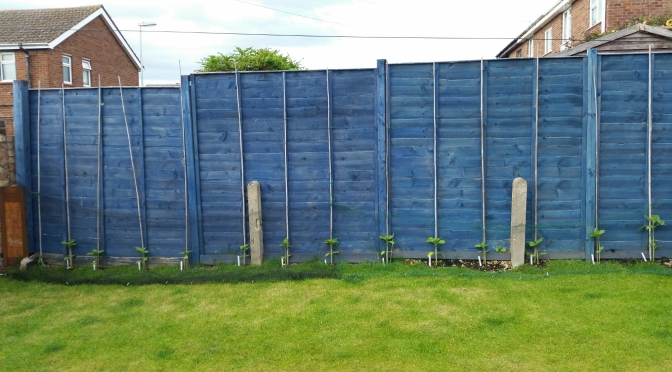 Kevin’s sunflower has entered the competition and immediately taken the lead as the tallest.

The plant (far right) replaces Abbey’s sunflower which mysteriously went missing yesterday after Fozzy was seen playing with the netting.

John H’s plant was one of the forerunners but looks small next to the newcomer.

Kevin’s plant was 3rd sub and now faces the dangers of the Bull-Knox garden.

The other subs continue to prosper in safety. There is no guarantee they will get in the game but Fozzy and the bunnies are certainly doing their best!

Abbey’s sunflower is out of the contest.

Just a week after entering the competition as 2nd sub, Abbey’s plant has disappeared completely!

The sunflower was last seen this morning (Thursday 4th June).

Also this morning, Fozzy the puppy was spotted jumping onto the netting in an attempt to reach the plants and is therefore the prime suspect.

How can you be mad at this cutie though? 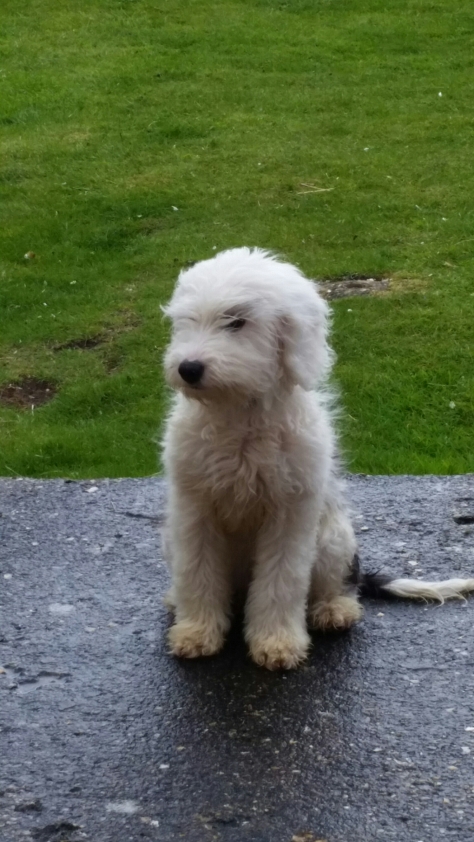 The first two substitutes have taken their place in the Annual Bull-Knox Sunflower Contest.

Radders’ and Coops’ sunflowers are out of the competition after the bunnies broke through the security netting and munched the baby plants.

First and second substitutes Caz and Abbey are now in their places. 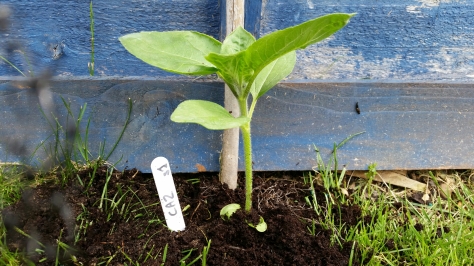 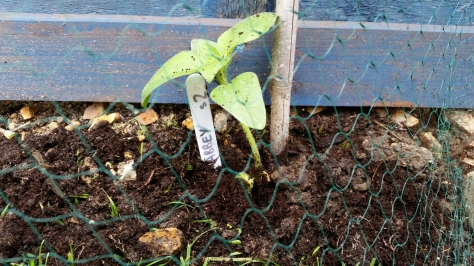 The four remaining subs, Kevin, Debbie, Nicky and Elena will be hopeful to get in the game soon! 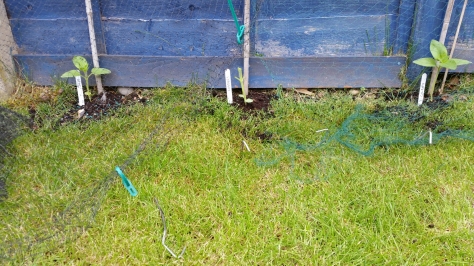 The bunnies have breached the security netting and munched the top of Radders’ sunflower.

The netting has been repaired and Radders’ flower will be monitored to see if it can survive. If not, Caz’s plant, which is the first sub, will take its place.